The Dance Department at Bodmin College (lead by Suzi Groom a graduate from the Royal Academy of Dance) delivers a diverse, creative and enriching dance education. Students will develop skills in performance, choreography and appreciation of their own work and professional dance repertoire. From Key Stage 4 to Key Stage 5, learners will improve their technique and expressive skills in a variety of dance styles. The Dance curriculum is taught in one fully equipped Dance Studio, including mirrors, barres, sprung flooring, sound system and projector. There are many additional opportunities available to students across all year groups, these include; weekly year 7&8 dance clubs (Tempo and Apprentice), ‘Dance Company’ for students in years 9-13, intermediate and advanced level ballet and tap classes for years 11-13, Level 2 Dance Leaders qualifications, workshops with professional dance artists and trips to see live dance performances. All students who choose Dance as one of their option choices will perform in Dance Platform, College Production and the Dance Summer Showcase. Students in years 9 and 10 will also produce whole class performance pieces to represent Bodmin College in the Cornwall School Games Secondary Dance Competition. The Dance Department aims to increase learner confidence, communication, discipline and team-working skills, whilst promoting the importance of healthy living, creative thinking and an appreciation for the arts.

Drama is pivotal to the heart of a school and community. It is the life blood running though the curriculum as Drama can frame any topic and any subject of enquiry. Through Drama, young people imagine, make, wonder, collaborate and share in each other’s stories and cultures to discover the creative power of diversity. Drama gives young people the power to express and strengthen our shared humanity.

We encourage students to be curious, confidently independent, imaginative, critical, inventive, visionary, collaborative, open-minded, tolerant, entrepreneurial and to make links across all aspects of their lives. Students, through our Drama curriculum, learn how to frame creativity by applying techniques and strategies to improvisation and devised work, to research practitioners and genre and explore a play text by analysing character, plot, structure and form, relating back to social, cultural and historical context. Our curriculum is ever-changing by responding to current practice and issues. We teach performance skills to all and give wings to those who want to work in the industry, by providing opportunities such as Shine Drama club, Winter, Spring and Summer Showcases, Raise Your Voice at the Minack in August, the County Drama festival, and the Shakespeare Festival. For all young people, our aim is to develop the person, to nurture the soul and to give hope and the certainty of change in an uncertain world.

At Bodmin College, Music is a vital part of a broad and balanced curriculum for all pupils that study with us. The study of Music builds confidence, helps you live happier more enriched lives, and allows you to discover the joy of expressing yourself. There is evidence that actively making music with others promotes wellbeing from infancy to old age, aids the development of personal identity and builds self-esteem; and, importantly, it opens doors to potential careers in our world-renowned music industry.

We give our students the opportunity to explore different genres and styles of music, play an instrument, to sing and to perform in lessons as well as extra-curricular choirs, ensembles, bands, orchestras and large-scale musical theatre productions. For all these reasons and more, we want to give our students the opportunity to develop a life -long love and appreciation of music as well as set them up for the possibility of further study of Music in the future. We strive for our students to learn to read and write musical notation, to explore and experience music of different genres, from different cultures, developing fusions and popular music, as well as understanding how these have all developed from the periods of musical history and classical greats.

Welcome to Drama: an audit of pre-learning, exploring listening and observation skills, establishing British values in mutual respect and tolerance, and setting ground rules for safe work in the space. We teach drama techniques and strategies to structure devised work, such as tableaux, thought tracking, slow-motion and hot-seating.

Shakespeare: We are in partnership with the RSC and embrace its teaching in class, eg ‘A Midsummer night’s Dream; in Year 7 linking with the Mastery programme in the English Department.

Melodrama and Slapstick: introducing the teaching of comedy stage combat techniques. This is a very physical unit and students have the opportunity to research into the historical background of the Victorian theatre and early 20th Century silent movies. The emphasis is on technique and precision, highlighting the importance of rehearsal, editing and refining work and playing to an audience.

Gothic Horror: we echo the English department in the thematic teaching of Gothic Horror and the power of storytelling by creating dramatic tension and atmosphere. We use stage lighting, sound, music and props, group devising techniques and conventions such as cross cutting, role on the wall, slow-motion, monologue, storytelling, writing, direct address, thought-tracking and debate.

Improvisation: techniques are developed further with skills taught in both spontaneous and prepared contexts, using a variety of different stimuli and starting points, including current news stories, issues linked to RSE education and ethics.

Characterisation: work on motivation and actor objectives, in both scripted and devised work, exploring the theories of Stanislavski. We work together to make meaning in drama, for example, with the use of props and lighting as having symbolic importance in a scene as well as the semiotics of people and objects on stage.

Shakespeare: We are in partnership with the RSC and embrace its teaching in class, eg ‘The Tempest in Year 8.

The year 7 programme of study involves the development of basic musical literacy, listening and appraising, keyboard skills, singing, group and solo performance, developing a wider general musical experience and understanding the historical context or development of different genres of music.

Topics in year 7 include:

Welcome to Music – finding your voice; singing, playing and performing, elements of music; instruments of the Orchestra.

Topics in year 8 include:

Rap & Hip-Hop - figurative language, ‘Where is the Love?’, writing and performing 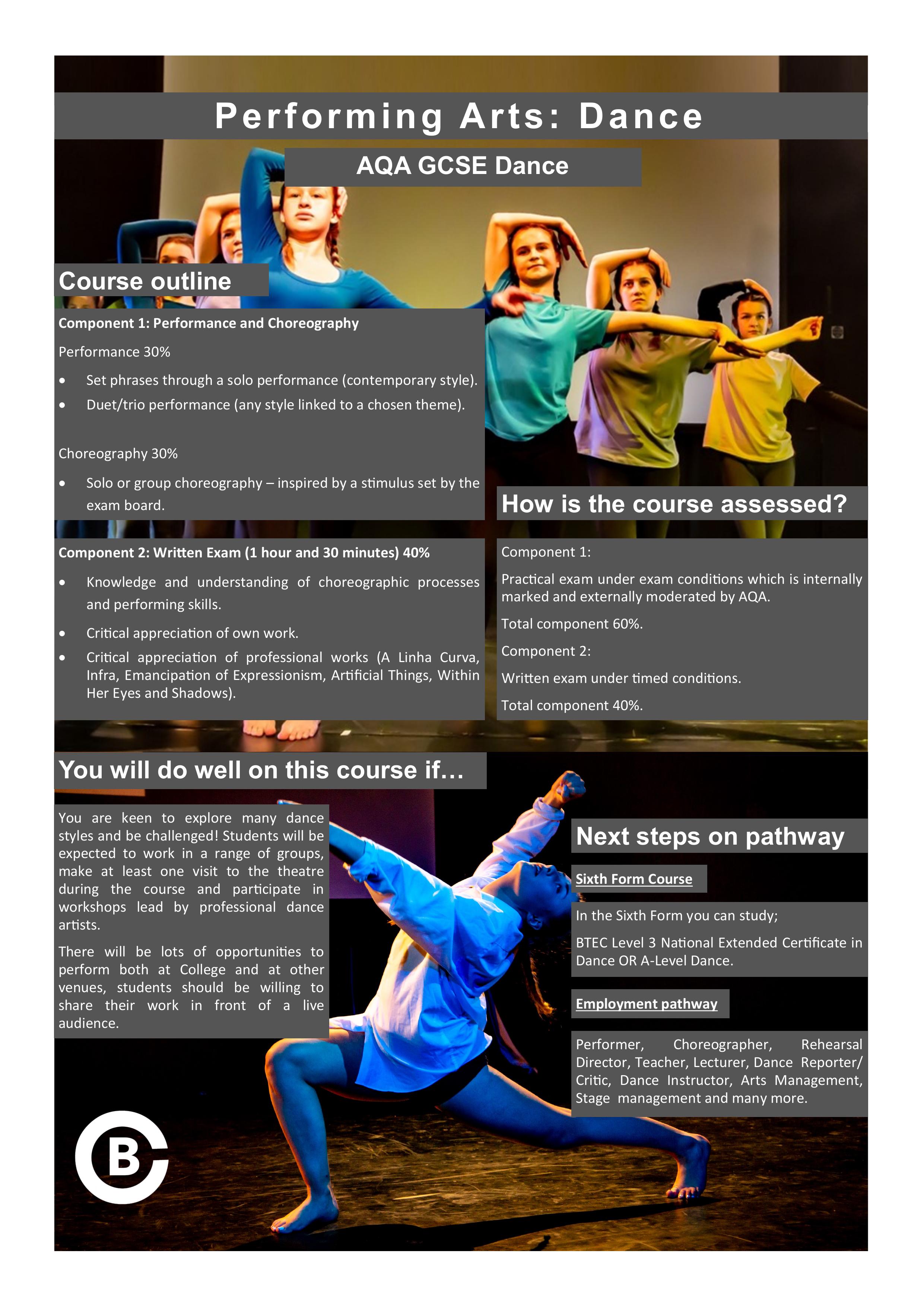 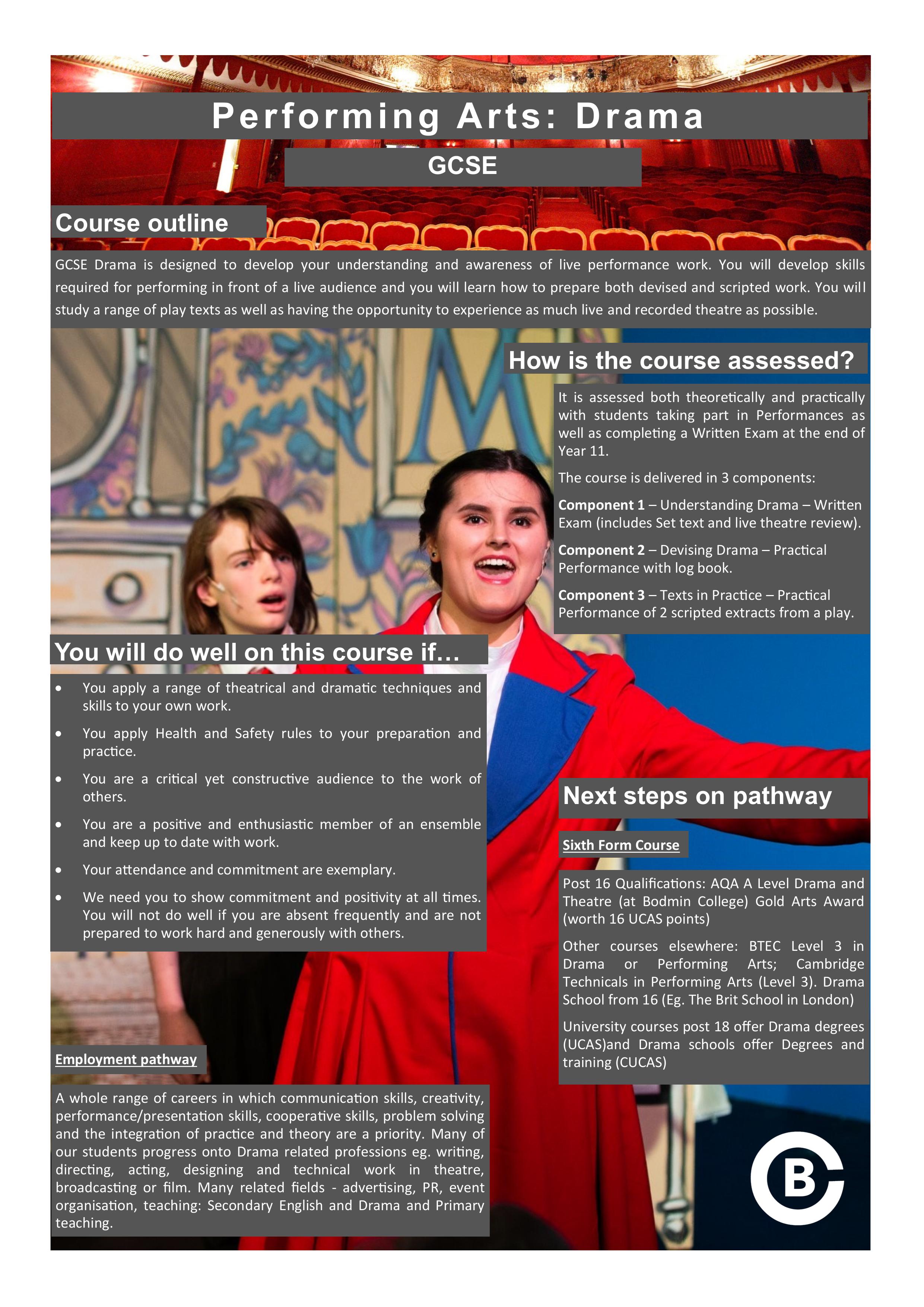 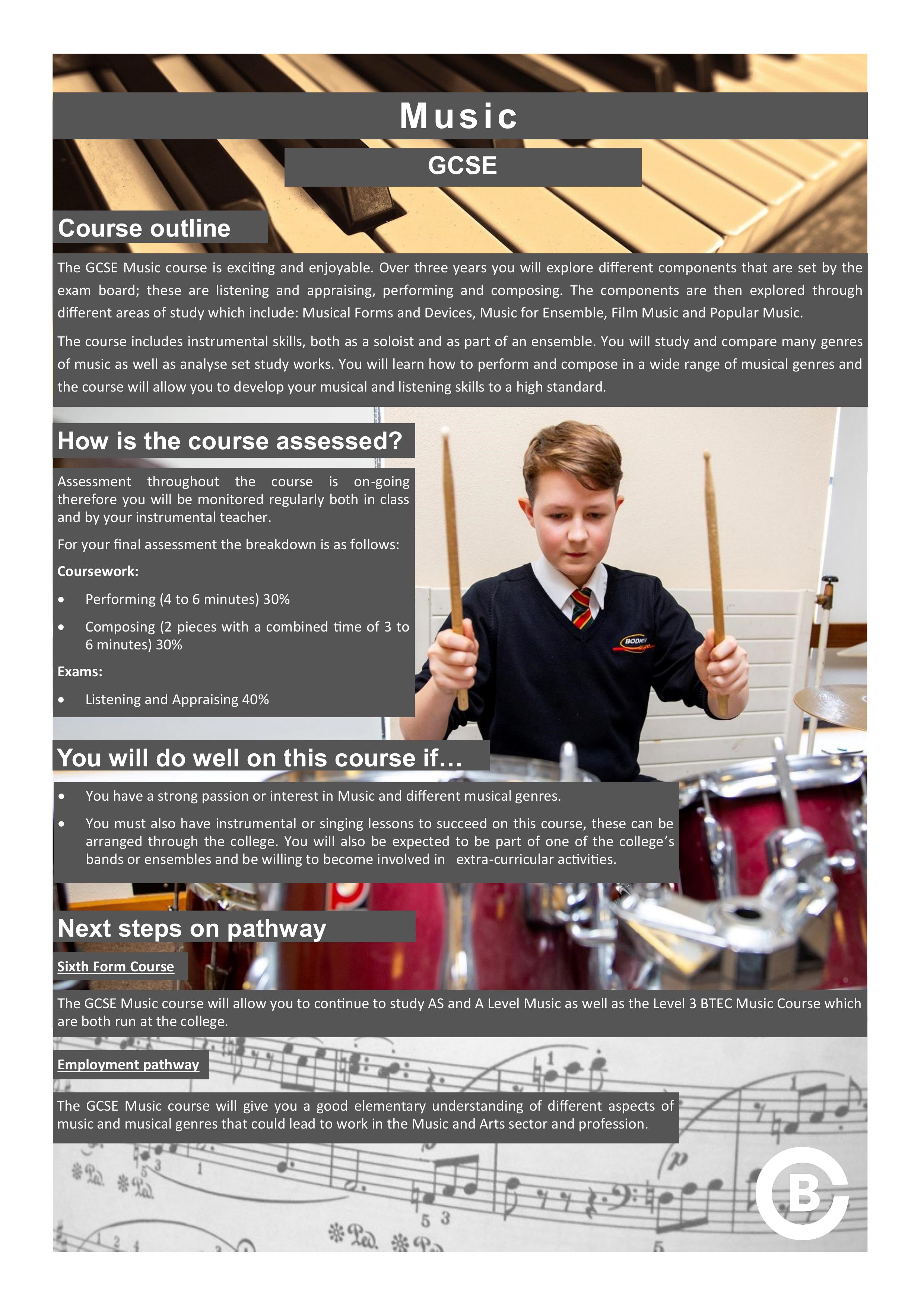 Check out all the GCSE and Level 2 Vocational courses on offer. 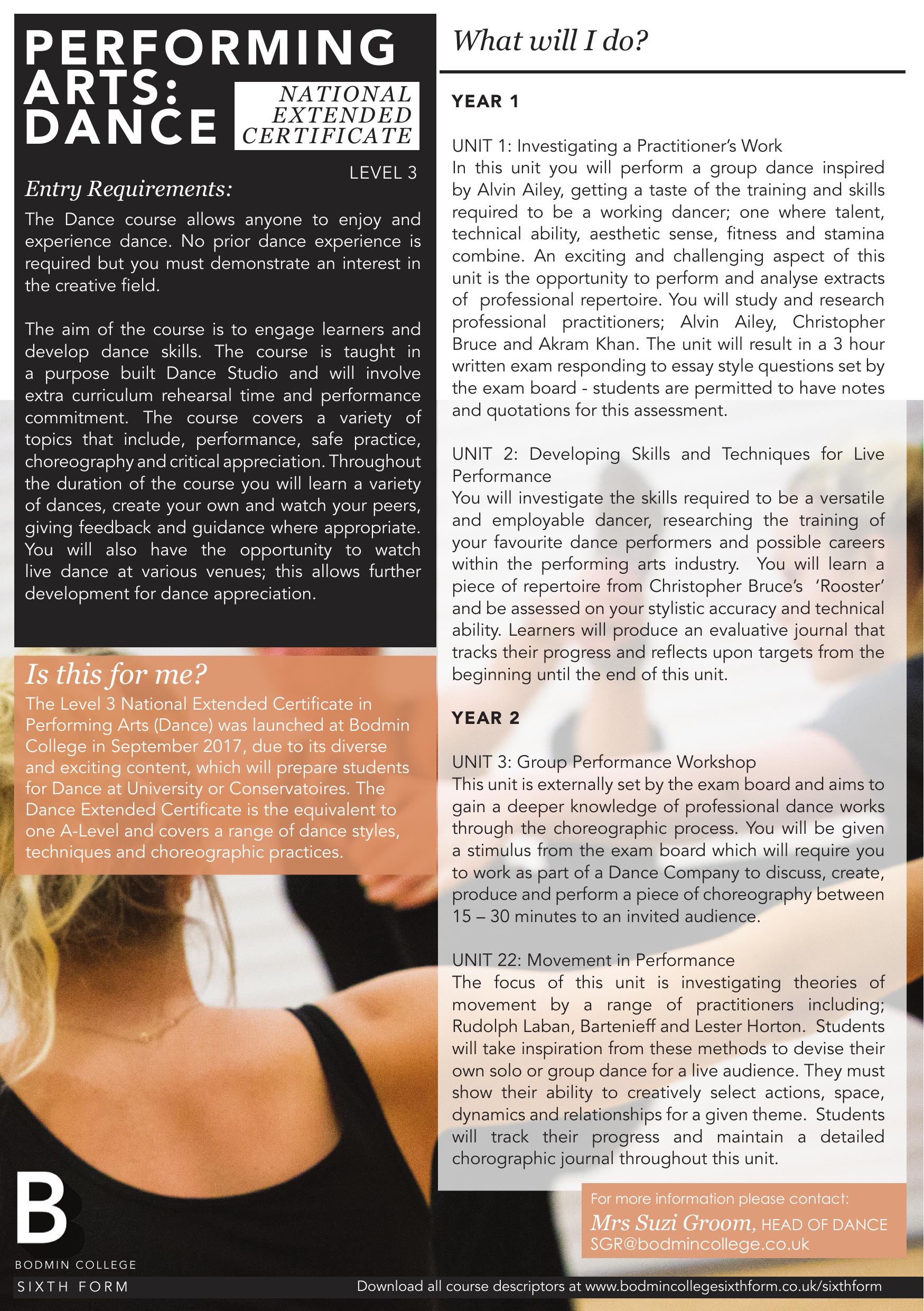 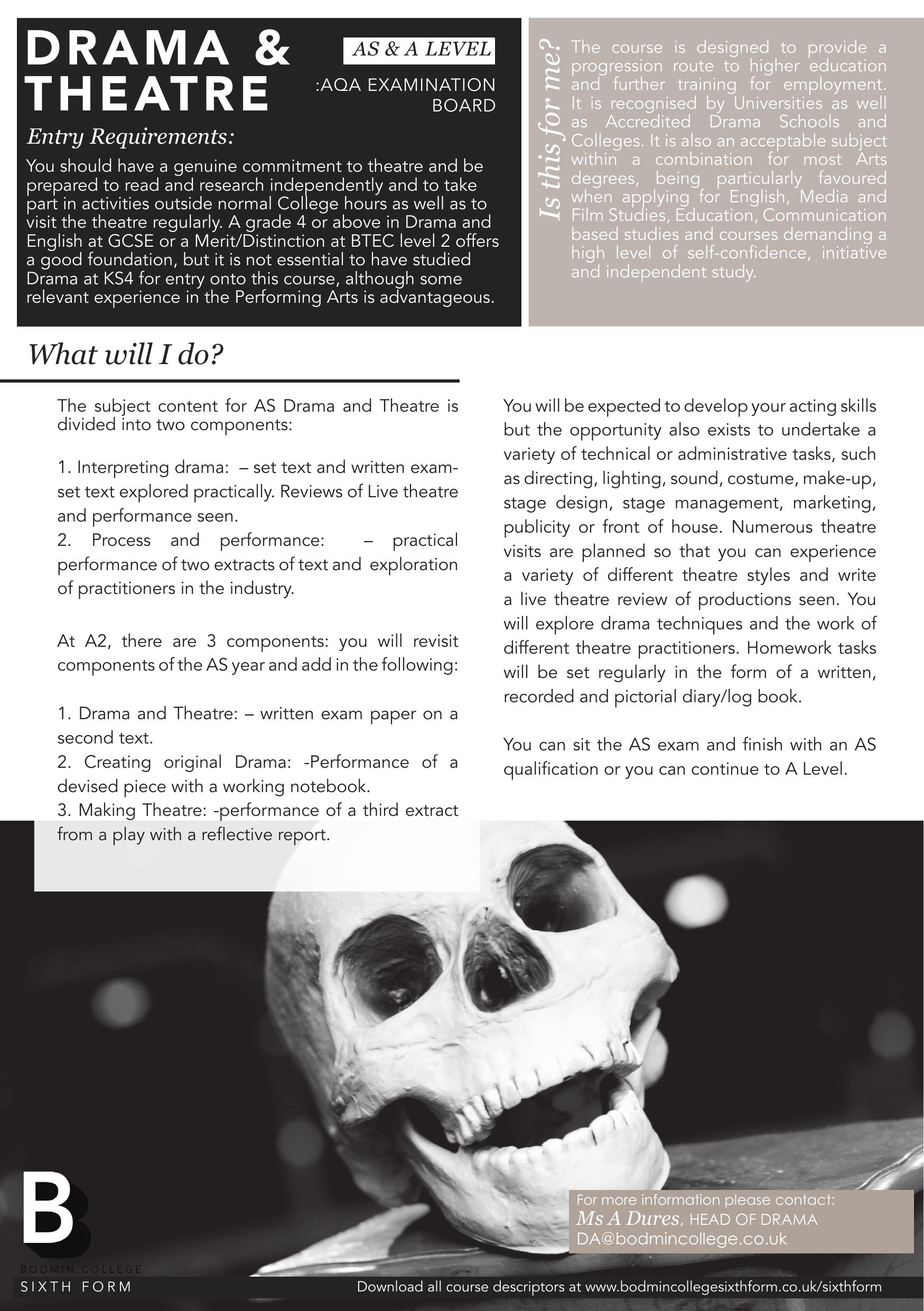 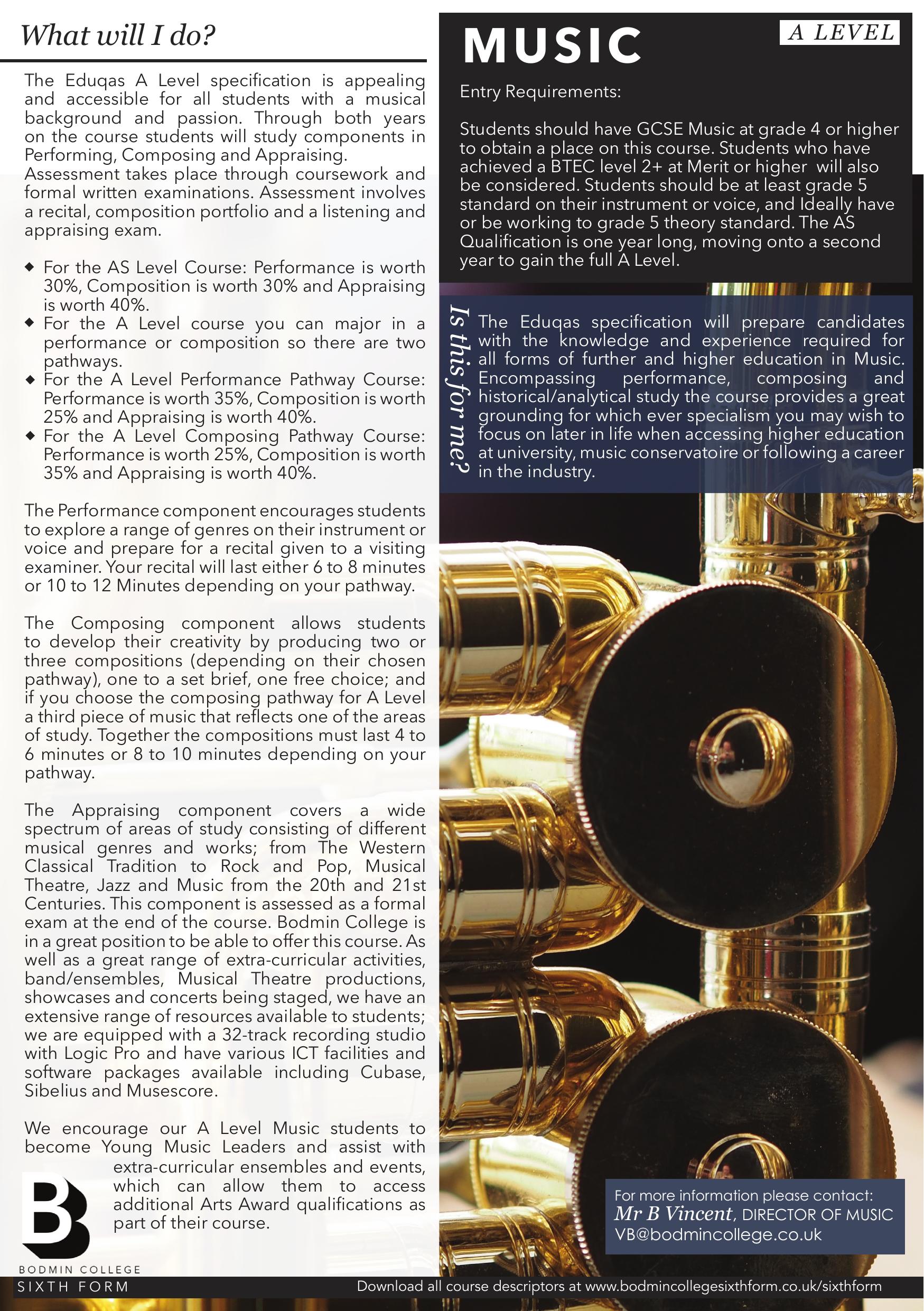 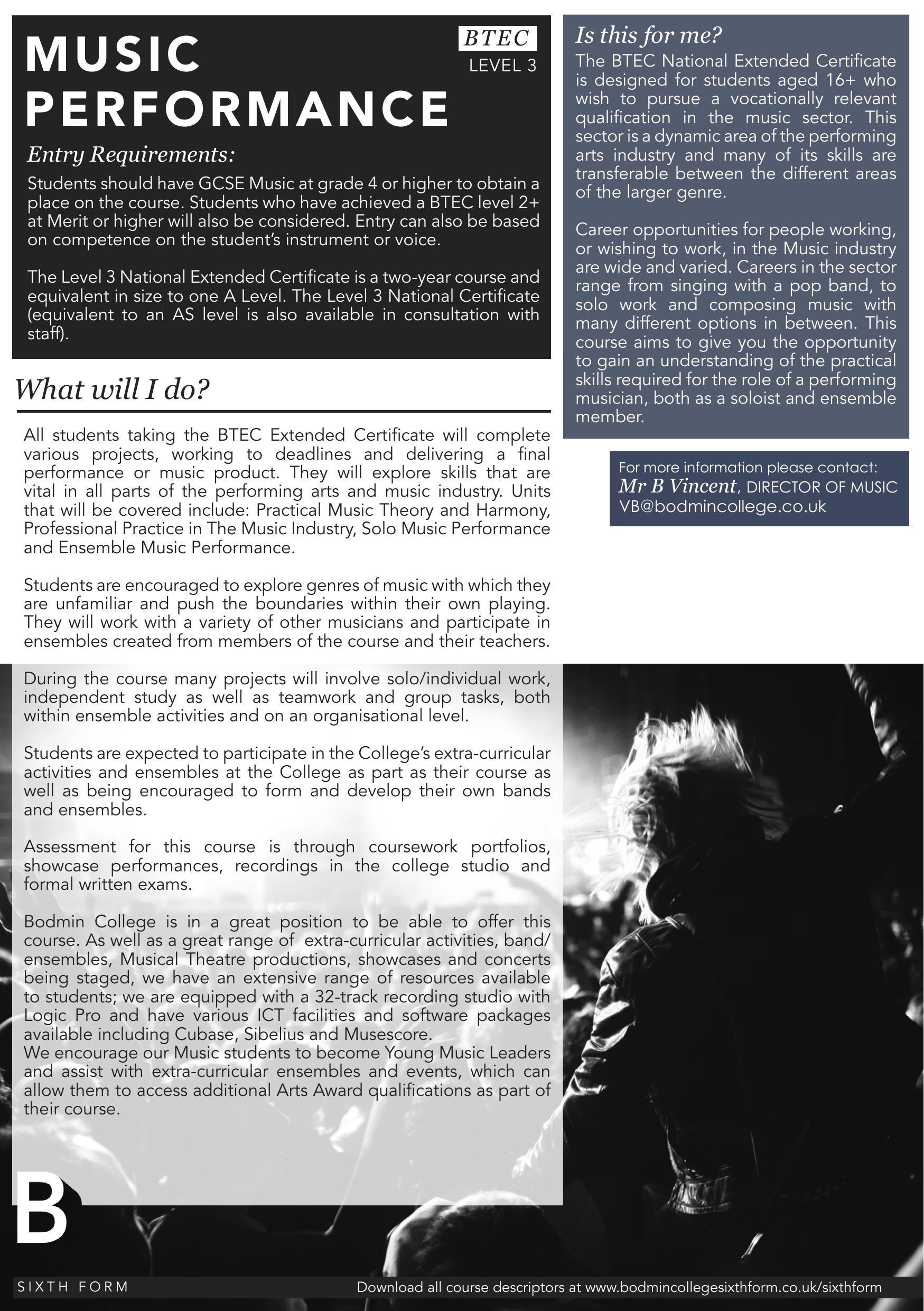 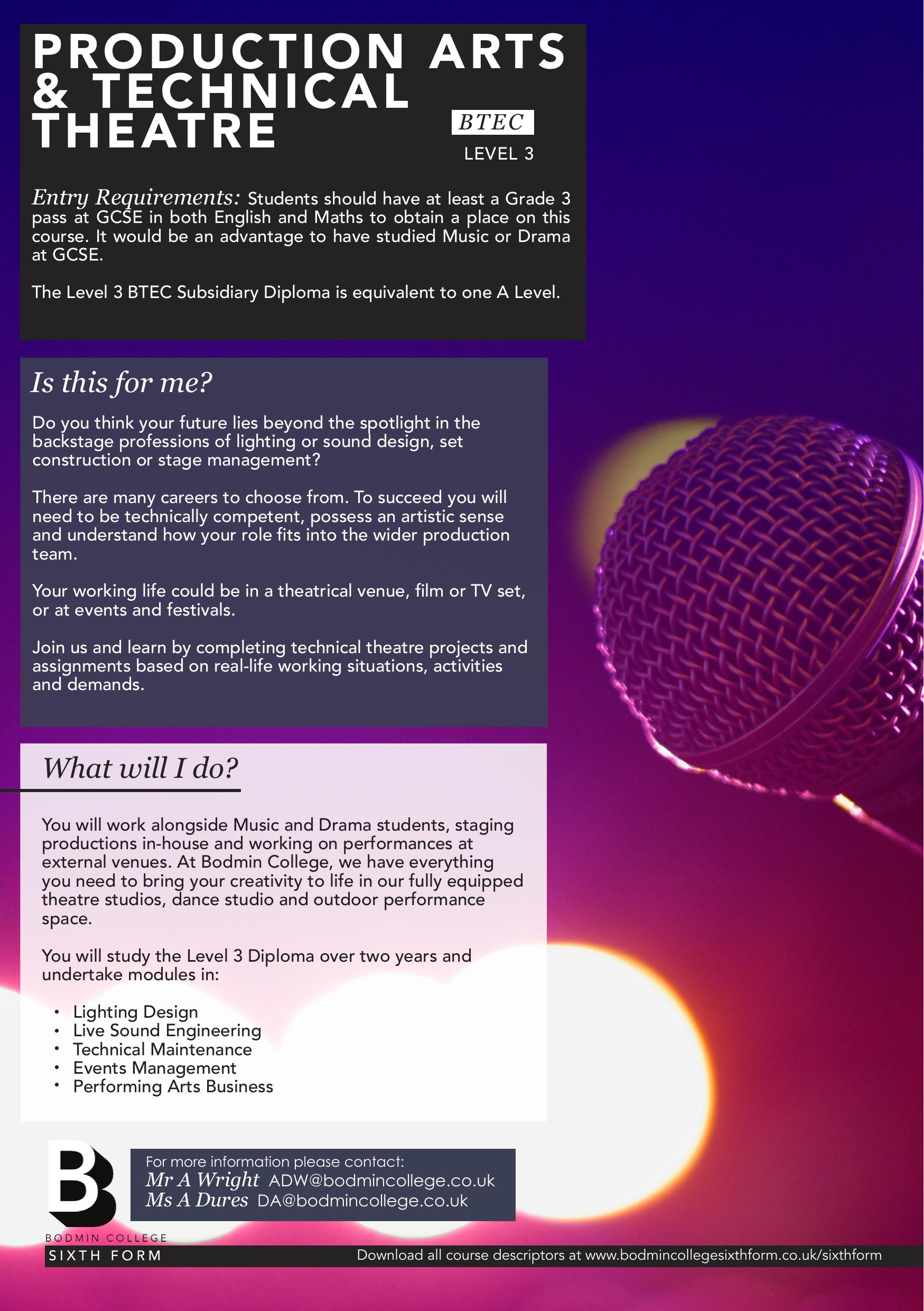 Check out all the A Level and Level 2/3 Vocational courses on offer.